DUBAI, United Arab Emirates–(BUSINESS WIRE/AETOSWire)– The mosque, built on the initiative and under the special supervision of Nursultan Nazarbayev, is expected to become one of the new symbols and main attractions of Nur Sultan. The mosque, which is of great importance in showing the unity and friendship of the 130 ethnic groups living in Kazakhstan, promises a magnificent experience with its high viewing terrace.

Nazarbayev, who examined the architecture of many worship places during his trips abroad and laid the foundation for the construction the day before he left his Presidency, also participated in designing the mosque. The design is therefore derived from the collective experience of the Muslim world. 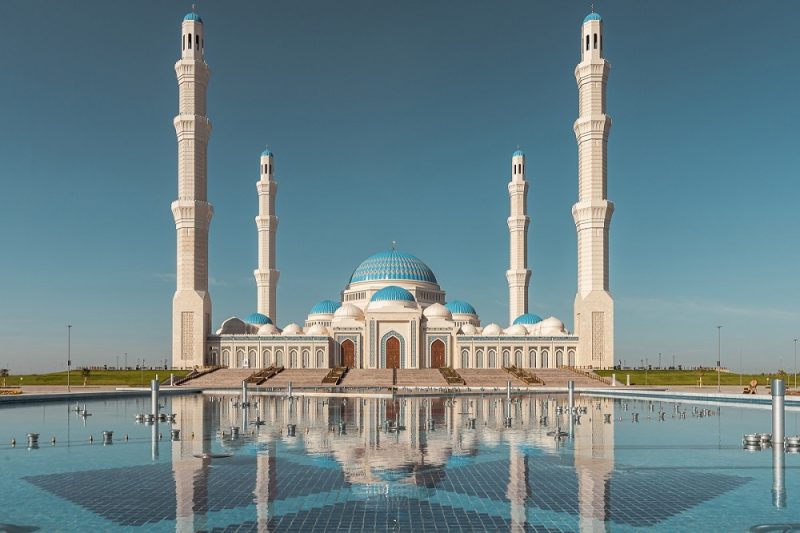 Natural materials such as natural stone, marble, gold leaf, special crystal, stained glass, tile, and glass mosaic were used in the project. Chairman of the main contractor Sembol Construction & Rixos Hotels, Fettah Tamince had carefully studied together with experts from Turkey, Arab countries, Italy, Germany, and other parts of the world for this mosque combining the spaciousness of blue domes with magnificent architecture.

One of the biggest of its kind

Nur Sultan Grand Mosque, which can be seen from many parts of the city, is nominated for Guinness World Records. The mosque, which carries a depiction and symbolic meaning at every point of its design, holds a world record for the size of the main chandelier in the Haram section. The Qibla Wall claims to be the largest of its kind with the number of crystals used and its total size.

Nur Sultan Grand Mosque, which has one of the largest temple doors in the world, also includes the world’s largest mosque courtyard built in geographies where the winter climate prevails. The 70-meter-diameter carpet is among the candidates for the world record.

The new mosque is magnificent in all respects, with its complex geometric forms and unlimited hospitality. This unique structure, also of great importance for the Kazakhstan tourism industry, stands out with its ability to host up to 30,000 visitors simultaneously.

You can watch the videos of the mosque from https://www.youtube.com/watch?v=9SDXPLQau58